During the CoDev 2011 conference in Scottsdale, Arizona, I was impressed with a speech given by a local CEO, John (“Jay”) Rogers of Local Motors in Chandler, Arizona. This small company designs exciting new vehicles using design contests that are open to the public. “Crowdsourcing” is one of the trendy new approaches to innovation, but it’s more than just a buzzword. When managed with smart tools, good incentives, strong respect for the participants and a strong brand, it can add a vast amount of energy and brilliance to an innovation pipeline.

Local Motor’s rapidly growing community (12,000 participants so far) contributes designs and feedback to help in the selection of potentially successful aesthetic concepts for automobiles that Local Motors will then build locally in a microfactory, with final customization of the appearance being achieved with an environmentally friendly and durable vinyl wrap that eliminates the need for paint and gives the owner freedom to have a unique look. The final assembly is done with hands-on help from the new owner, who becomes intimately familiar with the vehicle and with its maintenance.

After Jay spoke, that evening I drove down to Chandler, Arizona and attended an open house at Local Motors hosted by Jay himself. He allowed photography, so below you can see some views of Jay speaking and some shots of his vehicles in various stages of construction. The Rally Fighter, for example, is an incredible rugged, safe, and fun car that is legal on the road but a load of fun off road as well. It’s able to do very nice jumps.

These cars weigh much less than other cars their size, offering a huge bonus in mileage. Great engineering and innovation at many levels makes this possible.

The microfactory concept involves assembly of a small number of vehicles at a time in sustainable, efficient processes. Very cool. 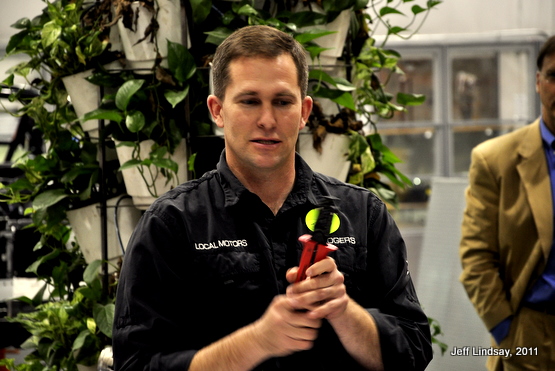 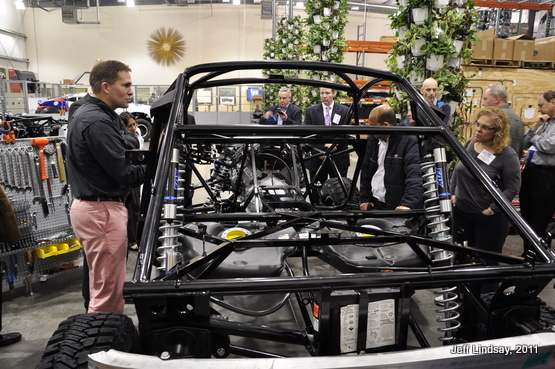 Jay discusses the rugged chassis of an embryonic Rally Fighter

Legal on the street, but built for off-road excitement, too. 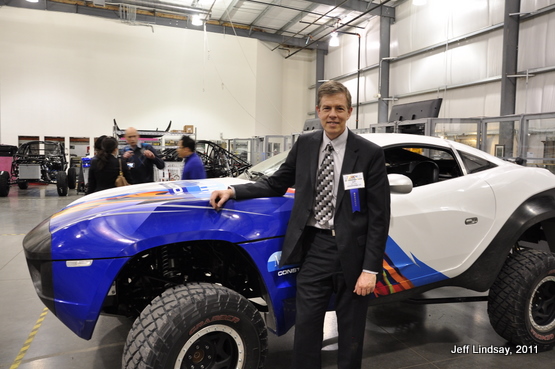 Jeff Lindsay and a Rally Figher at Local Motors