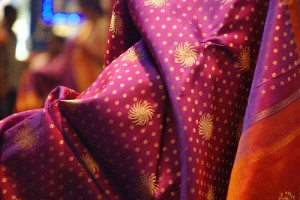 As I reported in my weekly newspaper column, I recently went to China and got a first-hand look at a nation of innovation. Steeped in rich history, I learned many things about China’s softest commodity: silk! Silk is an innovation that has been around for thousands of years, but interestingly is pretty much in the same form that it was when it was first discovered. Today’s methods for harvesting of the threads would be quite familiar to anyone that was around when it was first discovered.

On my recent visit to China I had the opportunity to visit a silk factory with my team and learn a little bit about this interesting ancient discovery and industry.

Commercially it all starts of course with the silkworm. Engorging itself night and day on a diet of fresh picked leaves, it grows for about a month until it is time for it to spin its cocoon and rest. Then working tirelessly for days spinning thousands of feet of a continuous silk thread, the worm creates it protective envelope for its transformation into a moth.

At this point the natural process is interrupted and the puffy white cocoons are picked by hand. The silk harvesting effort is still today very much a manual process. One by one cocoons are inspected for defects and segregated by size, specifically whether they are “double cocoons,” where two caterpillars have joined their shelters, or whether they are solo.

Single cocoons are examined one by one by hand for defects, heated in warm water to loosen the fibers slightly, and the starting end of the thread is found. This is where some limited automation takes over. It is surprising that the whole process seems fairly trouble-free, without tangling or frequent fiber breakage.

In the silk industry, all of this is done in a simple, but controlled, environment. Thousands of caterpillars are fed in stacks of shallow tray baskets at controlled temperatures.

Textiles and garments made of silk were considered a luxury item for many centuries and were the basis of a lucrative trade across Europe and Asia. Because of its value as a principal element of the Oriental economy, the Chinese tried to maintain their monopoly as long as they could. The secret of high quality silk production was closely guarded for hundreds of years. However like any secret, if valuable enough, it eventually gets out.

Even with today’s advanced polymer technologies, silk is still a wondrous standout material. Commercial textile silk fibers are three to 10 times thinner and finer than a human hair, but are very strong, on the order of the strength of steel. Silk from some species of insects is as strong as Kevlar. It is attractive, shimmering in the light due to its rounded triangular fiber shape, and is comfortable to wear because of its absorbency and lightness.

Although because of the abundance of synthetic polymers, the uses of silk are on the decline. However it still has many commercial and industrial applications — from parachutes, to bedding to surgical sutures.

It has taken us thousands of years to produce materials that can compete with silk, but silk, along with other natural fibers, are still preferable for many applications and are still produced basically much as they were when they were first discovered.