I’ll be the first to admit that computer graphics and animation are not my forte. But I also know that those who can expertly maneuver computer images with ease rely heavily on advanced technology and innovation to make lifelike images. And this type of imaging is not just for movies, video games and other entertainment. A multitude of industries from medical to automotive are utilizing computer imaging and animation to bring about real change for consumers and patients.

So why am I sharing news of a sheep in a knitted jumper? Because knits and fabrics ushering in a new era of ultra-realistic animated characters. This image is the first of its kind to demonstrate how researchers are using and mastering a complex feat. Read on:

The images of a sheep in a knitted jumper is the first time Pixar researchers have been able to ‘virtually knit’ an outfit, and could lead to far more realistic animated characters.

To put clothes on their characters, computer graphic artists usually simulate cloth by creating a thin sheet, then adding some sort of texture.

However, this doesn’t work for knitted garments, as they are simply too complex. 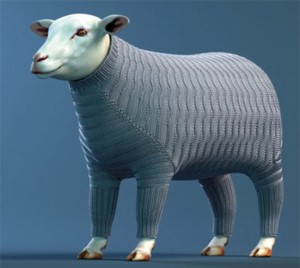 To make the image realistic, the computer has to simulate the surface right down to the intricate intertwining of yarn.

So computer scientists are in effect teaching the computer to knit.

The research, from Cornell University, was unveiled at a computer graphics conference.

‘We are actually changing the shape of the yarn loops that make up the stitches,’ Professor Steve Marschner from Cornell, who led the research, explained, ‘simulating how they wrap around other loops.’

The result is a simulation with detail down to the yarn level.

The trickiest part, Marschner said, is to make sure the images of yarn loops don’t slide through each other like ghosts.

That would cause the simulation to “unravel” like a dropped stitch in real knitting.

The team has also revealed far more natural looking knitted outfits for human. Funded by Pixar, the research could be seen on a cinema screen soon.

HOW A COMPUTER KNITS

The Cornell innovation is to create a 3-D model of a single stitch and then combine multiple copies into a mesh, like tiles in a mosaic.

The computer projects the mesh onto a model of the desired shape of the garment, treating each stitch as a tiny flat polygon that stretches and bends to fit the 3-D surface.

In knitting, a single stitch is formed by pulling yarn through a loop. Rows of stitches, built on the loops formed by previous rows, make up the finished garment.

The yarn can be pulled through in a variety of ways or multiple times, creating various shapes and textures.

To simulate this realistically, a computer graphic artist would have to painstakingly model the 3-D structure of every stitch.

The researchers tested their method with several patterns from knitting books and created images of dresses, sweaters, a shawl and a tea cozy.

The simulations are highly realistic, but the researchers noted that the results of knitting a particular pattern depend on the yarn and needles used, as well as the style of the individual knitter.

The method has some parameters that can even be adjusted to simulate the effects of different needles or yarn, or different yarn tension used by the knitter, they said.