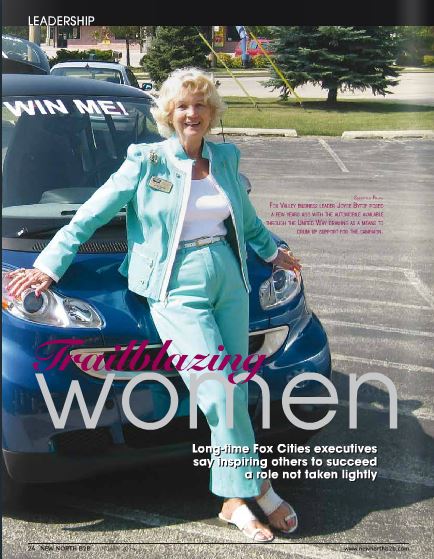 I am humbled and pleased to be included in this group of local women who have used their talents, wisdom, strengths (and yes, even weaknesses!), to create concrete inroads for women in industries where there had been but few paths before them.  The cover photo is especially beautiful and striking. I’ve known Joyce Bytof for a long time, and treasure our friendship – along with the friendships of all these strong women. Joyce passed away last October, and I think we’ all agree that if you don’t read on for any other reason than to get to know who she was and how she contributed to women in our community, you’ll be glad you did.

Larry Avila over at New North B2B interviewed me recently for this article which he has kindly allowed me to reprint here. (Do be sure to subscribe to the informational monthly magazine for great articles and resources.)

In the past three decades, numerous Fox Cities business professionals built names for themselves through career accomplishments and community activism but a handful took it a step further, setting examples for others to follow and proving no obstacle was too great to achieve success.

Among accomplished Fox Cities business women, a few names often mentioned by other professionals include Kathi Seifert and Cheryl Perkins, who both enjoyed long careers and served management roles with consumer products giant Kimberly-Clark Corp.; Susan May, president of Fox Valley Technical College; and Joyce Bytof, a beloved community activist who led Coldwell Banker The Real Estate Group between 1988 and 2013, building it into the largest residential real estate firm in northeast Wisconsin. Bytof passed away in late October following a long bout with cancer.

What these women share in common is a passion to make others around them find what they must within themselves to overcome any hurdles they face to achieve their dreams.

“(Joyce) just had a tremendous amount of energy,” said Chuck Peeters, president of Coldwell Banker The Real Estate Group. He worked side-by-side with Bytof for 25 years.

Peeters said it wasn’t uncommon for Bytof to put in a full day in the office, then spend a few hours after work attending a community event or volunteering time with one of the numerous organizations or causes she was involved with through the years. Some of those groups included Fox Cities Chamber of Commerce & Industry, United Way Fox Cities and Wisconsin Realtors Association.

Her professional approach and passion for building a stronger community to preserve it for future generations served as an example that was passed on to all Coldwell Banker The Real Estate Group employees as well as Fox Cities residents, Peeters said.

“She was a person who just never gave up, no matter how big or small the task,” Peeters said. “She always faced challenges head on and always moved forward and did it graciously when she did it.”

Seifert recalled when she was in college, few women considered careers in business. She grew up in an era where women who choose to work were steered toward teaching, nursing or secretarial professions.

Seifert recognized early in her professional life it was time to break tradition.

Early in her career at Kimberly-Clark, Seifert said her mentors were men, mostly because there were few women professionals she could seek advice. Jack Besser, a vice president of sales at the company, was among the first people to help her.

“(Jack) had been in the business for many years and really treated me like a daughter, giving me advice on how to be a presenter and teaching me about the importance of understanding customers needs,” Seifert said.

Wayne Sanders, former chairman and CEO at Kimberly-Clark, also mentored Seifert during her time at the company.

During her 27-year career at Kimberly-Clark, Seifert championed efforts to change the company culture, encouraging diversity to open doors for other women.

She said as more women were given opportunities and showed they could succeed, it just grew from there. Seifert’s career achievements and initiatives she led to bring about change in the workplace were highlighted by Forbes magazine in 2001 and Fortune magazine in 2002.

“When I was moving up at K-C, I felt a deep responsibility to help other women achieve success at the company,” said Seifert, who retired from the tissue and consumer products converter and marketer in 2004. “Helping people be successful can also drive business results.”

May said while she followed a traditional career role for her generation, she achieved much success including being the first woman to serve as president at Fox Valley Technical College. She was promoted to the role in 2008.

May, who has been with Fox Valley Tech for 30 years, said the workforce shift became apparent in the past 20 years. She said it took the efforts of many women who pursued careers once considered male dominated to drive change and break stereotypes.

“There were many women who were in those non-visible roles, who were willing to step out of the traditional roles across (many professions),” May said. “As more women succeeded in those roles once male dominated, it encouraged other women to follow and try it for themselves.”

Before Perkins launched Innovationedge in 2007, a Neenah-based consulting firm, she spent 22 years with Kimberly-Clark. Perkins was the firm’s chief innovation officer when she left in 2006.

Perkins said many people have influenced her professional life through the years but her family and friends provide a constant source of inspiration today. Her personal growth also is enhanced by the people she meets throughout her global business travels.

When she mentors others, Perkins said she leverages her background, knowledge and experiences to guide the development of the mentee to help them define innovative ways to reach their personal and professional goals as well as manage any challenges that may arise along the way.

“I personally have found that mentoring others is very rewarding as well,” Perkins said. “I have worked with many talented individuals and have enjoyed helping them advance their own development and guide their careers.”

How to be an effective leader is a common topic often explored by experienced professionals and those new to the role.

Perkins said leadership is about the ability to influence the thoughts, emotions and actions of others.

“Leaders are passionate about visions and beliefs and they have the ability to get things done and make progress themselves and through others they influence,” she said.

She said effective leaders exhibit strong communication skills, have focused passion, tolerate mistakes, and are able to inspire others.

“I work with many leaders across (many) industries in my current role and find that they are able to raise the performance of others to a higher level than existed before,” Perkins said. “They inspire and motivate others to enable them to do what they do well.”

May follows a similar approach.

She encourages an entrepreneurial cultural at FVTC, May said, meaning she listens to her staff, asking what resources they need to succeed and keeping barriers to a minimum on their path to success.

“You’re always listening and staying in touch with opportunities,” May said. “The culture has to be supported and encouraged.”

As faculty and staff develop programs to best meet students’ needs, students then take what they learn to be successful at what they decide to pursue.

“I like to help people think anything is possible in terms of what they are trying to accomplish,” May said.

May said she has been active with the Wisconsin Leadership Development Institute, a leadership development program for the state’s technical college system. Those she has worked with through the program often ask her advice on personnel management.

“People dynamics and how to get people to work effectively in teams are some common things people ask about,” May said. “I’m often asked for examples of things I may have dealt with.”

Seifert, who launched Appleton-based consulting firm Katapult LLC after retiring from Kimberly-Clark, maintains an active professional career. She is co-chairperson for The New North Inc. and is a member of many boards of directors including Appleton-based Appvion and cosmetics maker Revlon. She also serves on the boards for numerous civic organizations including Fox Cities Performing Arts Center and Community Foundation of the Fox Valley Region.

Seifert said she has helped dozens of people achieve professional success throughout her career.

“I really want to help someone achieve their full potential,” she said.

Her life experiences have also been helpful for high school students around the Fox Cities. For several years, Seifert has mentored high school girl basketball players in Menasha and recently began working with girls in Kaukauna.

“I don’t coach, I mentor,” Seifert said. “I help them build self confidence and realize the importance of teamwork and being committed to winning.”

Peeters said Bytof, who was also his mother-in-law, never sought attention for the things she did for the betterment of the community or her business.

“She just took a lead on so many initiatives to help many organizations succeed and flourish,” Seifert said. “She was just an incredible role model for all of us and showed that every person can make a difference.”

Perkins said Bytof had the ability to look beyond “what is today” and quickly articulate “what could be tomorrow.”

“She would then share her knowledge and experiences to help others advance their agenda and do the best that they could do to deliver their vision,” Perkins said.

May said Bytof’s passion she brought to her business and willingness to give it her all in everything she did offers many valuable lessons.

“She showed people that they just shouldn’t quit at whatever they are trying to accomplish,” May said. “That’s something everyone can learn from. If you’re going to be successful, you have to bring passion and dedication to the effort and (Joyce) certainly did that.”