The food sciences industry has made a startling advance this week as reported by the Washington Post. Apparently making a synthetic version of cow’s milk can be surprisingly easy:

To achieve this, they’ve gone so far as modifying sunflower oil so that it can take on a structural composition similar to milk fats, substituted lactose with galactose, a nearly indistinguishable sugar, and culturing yeast to release casein, a natural animal milk protein. If successful, the process they’ve developed could someday be used to churn out a wide range of dairy products, such as cheese, butter and yogurt.

The duo, both with bioengineering backgrounds, are the co-founders of Muufri, a San Francisco-based start-up that hopes to fashion the idea of lab-brewed milk as a more humane alternative for consumers. Funded by Singularity University’s Synthetic Biology Accelerator program, they’ve spent the last few months in a lab at University College Cork in Ireland, where they’re closing in on a prototype batch that’s 100 percent animal-free. 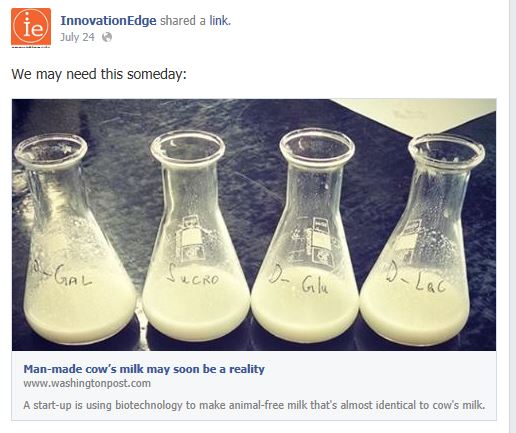