Here is a great example – one of many innovative approaches taken to help eastern Japanese farmers bounce back from the tsunami, modernize the region’s agriculture and increase farming output. 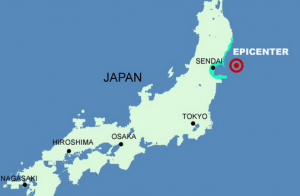 SENDAI, Japan – Even before a tsunami swamped fields east of the Japanese city of Sendai in March 2011, Chikako Sasaki and her husband, a rice farmer, had dreamed of starting a business selling food made from their own produce.

The tsunami was sparked by the biggest earthquake to hit Japan since records began, killing nearly 16,000 people and wiping out villages and towns in what was described as the country’s worst crisis since World War Two.

But just two years after the disaster, thanks to government subsidies and the enterprising spirit of the Sasakis and other farming families, Chika-chan’s Riceball Teahouse began serving lunches made by local women in its open kitchen.

“There was nowhere to work after the tsunami,” explained Sasaki, standing in the first-floor dining room. “So we decided to open this cafe, and now we all enjoy working here together.”

The restaurant is just one example of many innovative approaches taken to help eastern Sendai’s farmers bounce back from the tsunami, modernize the region’s agriculture and increase farming output.

The rice used in Chika-chan’s “nigiri” balls and curry dishes, also sold in the shop downstairs, is grown by the women’s husbands. The vegetables come from their own plots, and the “miso” – a fermented soya-bean paste – is made by hand.

The company in Wakabayashi ward also has a processing facility nearby, and is planning to expand its other activity of making boxed lunches for convenience stores and public events.

Sasaki said her husband managed to get his rice output back up to pre-disaster levels three years after the tsunami hit.

Recovery from the disaster has been a tough process for farmers, whose land was strewn with debris and contaminated with seawater. In eastern Sendai, along the coast, some 1,800 hectares of farmland were damaged, most of it rice paddies.