If you see young people wandering through your city looking for digital creatures to catch, don’t distract them! These are Pokémon fans, who are intently playing a brand new location-based mobile app game called Pokémon Go.

How big of a deal is this? It’s huge:

The Apple and Android app debuted last Wednesday evening in the United States, and the next day saw Nintendo’s stock price up 9 percent on the Tokyo Stock Exchange. (Nintendo owns only a third interest in The Pokémon Company.)  The free download shot to No. 1 on the top-grossing chart in less than a day. With that level of demand, developer Niantic initially had some trouble keeping its servers up, with a few outages and

connection issues. Most of those issues are being addressed, and soon players around the world will be hunting the beloved animated creatures via a GPS-powered world map.

Within a few days, players created hundreds of local Facebook Communities to gather with other enthusiasts. There is a hashtag #PokemonGo, and local police departments are warning that users should be especially aware of their surroundings to stay safe while playing.

Here is the video trailer that has captivated fans and inspired all those downloads: 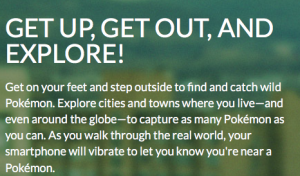 The game makers encourage players to go outside, exercise, and explore local landmarks, or “PokéStops” like museums and parks, where digital Pokémon are waiting to be collected. The GPS map is based on the actual real-world map of the streets and pathways where a player is standing, and identifies area landmarks like hotels, historical markers, businesses, police stations, churches and more.  There is a social element in that players can battle their Pokémon against each other at “gyms.”

In a few weeks, a small, Bluetooth-enabled accessory called the Pokémon GO Plus will be available for purchase so that fans on the move won’t need to look at their smartphones. The device connects to a smartphone via Bluetooth low energy and notifies players about events in the game—such as the appearance of a Pokémon nearby—using an LED and vibration.

How far will this craze go? And will it lead to other global trends in location-based games?