Before our current recession we saw many people dismissing the discounts, citing they were too much trouble. But the tough economic climate isn’t the only thing bringing them back into popularity. Internet coupons and discount codes that smartphone users can download are making deal-seeking hot again.

I just read an article over at Advertising Age about how many companies are copying the Groupon model for offering their fans and followers great deals. Groupon was launched just two years ago and quickly got 25 million subscribers. 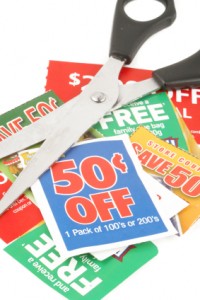 The article cites two major brands, Wal-mart and Healthy Choice foods,  offering incredible deals to their shoppers. Last week Wal-mart launched a Facebook app that offered a whopping 18 percent off of a plasma television set once 5,000 people “liked” the ad.

Groupon was the first to try this model based on likes, and of course it encourages people to share it with their friends in order to unlock the savings faster.

What I find fascinating is that unlike paper coupons, social media coupons greatly increase the brand’s fan base without costing much money.  I think you’re going to see a lot more of this model in the future. Imagine how this type of internet marketing will impact the consumer spending habits on hotels, restaurants, toys, electronics and just about every industry you can think of.