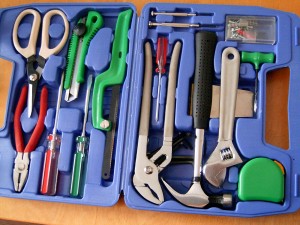 My friend Robert Tucker has put together what I think is a great list of the top innovation tools trending now, from ideation tools, commercialization tools, idea management tools, selection tools, and so forth. I like these because he includes case studies and real examples of how these tools are working in our current climate.

I’ll share the first one here, and let you browse the list over at his Innovation Resource blog:

General Electric’s recent adoption of this tool is reported to be the biggest new movement in the company since Jack Welch embraced 6 Sigma in 1995. This hot tool originated in Silicon Valley, as a process mapping system for tech startups. Today it is increasingly being adopted by larger multinationals to decrease time to market and bloated budgets. Similar to the business model canvas tool, it addresses the most pressing question innovation practitioners face: How do you get new things done faster and cheaper in today’s world of strangulating bureaucracy, rising costs, and 6 Sigma controls? The answer, according to Lean Startup evangelists, is: instead of heaping money on ideas, be stingy. Encourage everybody to think like a startup. Dole out very limited budgets, form cross-functional teams, and streamline development of new products and services that have the potential to disrupt markets because of differentiated value propositions.

GE’s program, called FastWorks, has given the movement a tremendous boost. Already, 40,000 employees have been trained after CEO Jeffrey Immelt green-lighted the biggest internal movement since Jack Welch adopted 6 Sigma  in 1995. Each business unit has a “growth board,” which meets to give thumbs up or down to potential projects. Thus far, some 300 projects have been approved. Before, a development team might have spent four years building a new product based on marketing surveys. FastWorks promises to cut development time in half. What’s the right value proposition? The Lean Startup method suggests constantly taking your prototypes before customers throughout the development process to get real world feedback, and course correction in half the time and at half the cost.