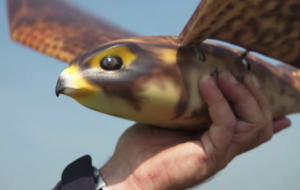 Birds flying near plane engines are dangerous. If they get sucked into the engines, there will definitely be an “incident report.” Now one company, Clear Flight Solutions, has developed “Robird,” a drone that flaps its wings to frighten other birds.

The developers say they designed Robird to mimic the movements of a raptor, gliding through the air like a bird of prey would do.

Operators can move the drone however they see fit, depending on weather conditions and birds in the area of the airport on any given day.

The company says it has been working on perfecting a wing-flapping drone for 15 years, and did a trial run in the Netherlands. Check it out: